The Opensource Deep Dive Into The Game Firewatch.

Before continuing, be sure to play the game!

The animal lists below contain location names which may be spoilers. The map doesn’t list location names, but may spoil hidden surprises and plot points. 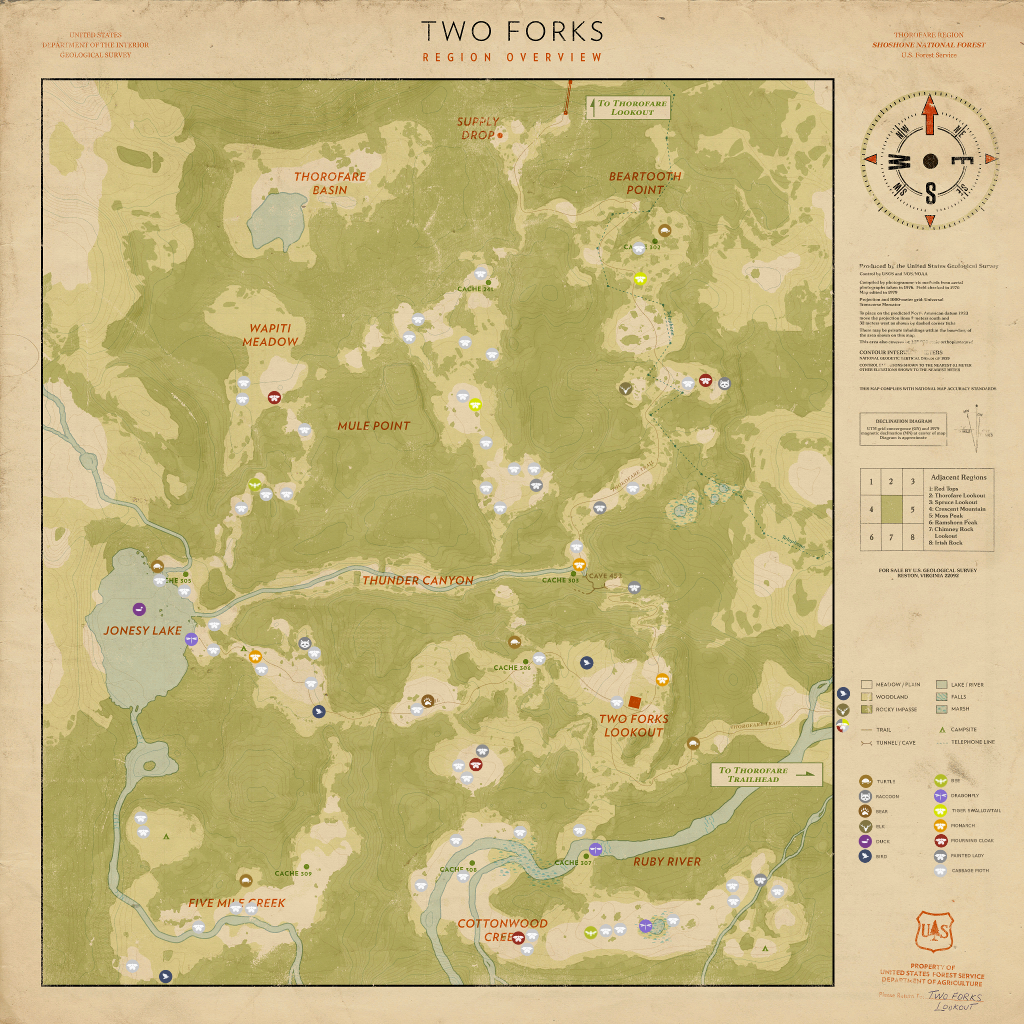 I’d read that both Black Bears (Ursus americanus) and Grizzly Bears (Ursus arctos) can be found in the Shoshone National Forest, and I was anxious about the idea of encountering either during my stay. For better or worse, I only spotted signs of their presence.

On my first day after arriving, I came across a clawed up stump, presumably used as a scratching post to sharpen claws.

Later during my stay, I came across a note in Cache 241 that tallied five bear sightings, but I’m not certain how old that would be. I also came across a note mentioning that “Mama Grizz” had been absent recently - perhaps she was responsible for the stump and had moved on.

Along the trail from Cache 306 toward Jonesy Lake (clawed stump)

Upon arriving at Two Forks, I was glad to see a copy of George Sinclair’s wonderful The Birds of Wyoming. I had forgotten to bring any bird reference books with me and had resigned myself to having to rely on memory to identify the Shashone birdlife.

As it happens, I’ve seen very few birds during my stay.

On my hike in, and at a number of locations across the Two Forks area, I’ve seen flocks of birds in flight. Unfortunately, they’ve been silhouetted every time I’ve seen them, making identification difficult, but something about them makes me think corvids.

On the first day after arriving, I spotted some kind of duck or goose out on Jonesy Lake. Unfortunately it was too far from shore for me to be able to make a positive identification. It was also unnervingly still and may have just been a decoy used by an illegal hunter.

Near Two Forks fixed to a dead tree is a small birdhouse. I’ve kept an eye to it for the duration of my stay, but haven’t seen it used at all. I had planned to crush a granola bar and leave it in there, but I was unable to reach the opening.

I have also heard woodpeckers, crows and other forest birds - even owls at night, but was never able to actually spot any.

A wild bull was grazing on the path as I hiked in from the Thorofare Trailhead. I was not prepared for just how big elk (Cervus canadensis) are. After getting over my surprise at the animal’s mass, I studied it for a while. As soon as it caught my scent though, it bounded off.

Inside Cache 303, I found what looked to be the antler of a young bull elk, apparently left there by a park ranger at some point.

Once during my stay as I was hiking through Thunder Canyon, I heard one bugling - an unsettling scream-like sound that echoed down the ravine. That was the last evidence of live elk that I would see during my stay.

Toward the end of my visit, I spotted a deceased elk, which looked to have been taken by some kind of carnivore, with wounds on its belly. Interestingly, it was wearing some kind of tracking collar with the number 3871 on it.

This place would be a lepidopterist’s dream. No matter where I turn, I feel like I’m being bapped in the face by a moth or butterfly. They are too numerous to list individually, but I’ve spotted five distinct species: the Monarch (Danaus plexippus) with its distinctive orange and black markings, the yellow Tiger Swallowtail (Papilio glaucus), the Mourning Cloak (Nymphalis antiopa) with its deep maroon wings and creme trimming, an interesting variant of the American Painted Lady (Vanessa virginiensis) featuring ventral markings on its dorsal side, and the Cabbage Moth (Pieris rapae) - the butterfly that everybody calls a moth just because it doesn’t have colourful markings.

The Ornate Box Turtle (Terrapene ornata) is enormously cute, but difficult to spot.

I’ve found five locations with signs of turtles, but once I’ve spotted or gotten close to one, I generally can’t find another.

When I first spotted one of Wyoming’s raccoons (Procyon lotor) in a small clearing, I was dismayed to see it wrestling with a packaged granola bar. The cache boxes around here may be bear proof, but they certainly don’t seem to be resistant to those tiny hands and mischievous minds.

As soon as it saw me, it scampered off, never to be seen again - or so I thought. Sometime later whilst exploring the ruins of Hawk’s Rest, I was startled to find a raccoon trapped inside a stove! It jumped onto me as I opened the door and then quickly hopped out the window. I think it must’ve been as scared of me as I was of it. I only caught a short glimpse, but I’m convinced that it was the same raccoon.

projectfirewatch.com is a community website and is not affiliated with Firewatch or Campo Santo.

Firewatch and the Firewatch logos are trademarks of Campo Santo. All other trademarks are property of their respective owners.